The sprue and runner system is the conduit that connects the machine nozzle to the cavities. During the injection phase of the molding cycle, the molten material flows through the sprue and runner to the cavities. The sprue connects the machine nozzle to the runner and may be either a cold or a hot-sprue. In the hot sprue design, the sprue has heating elements that maintain the plastic in a molten state eliminating the need for separation and reclamation. Ideally, the sprue should be as short as possible to minimize the pressure loss during injection. A cold sprue is tapered for easy release from the injection mold. There are three basic runner types in use: 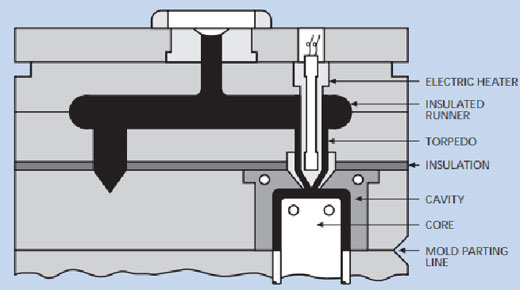 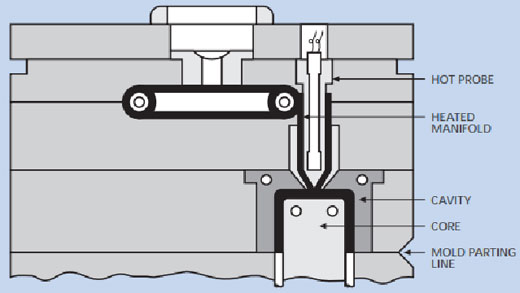 Cold runners are commonly used in two and three plate molds, but not in stack molds which require the use of a hot runner. The most commonly used runner designs are full round, half-round and trapezoidal the full-round is generally preferred for ease of machining and lower pressure loss. For fast cycles a full-round is not recommended since the greater mass of material takes longer to cool and may control the cycle time. The runner should be polished for ease of mold filling and part ejection. The insulated runner is the precursor to the hot runner. The runner diameter is very large and a thick skin is formed on the outside of the runner. The molten plastic flows in the center and, due to external insulation and the low thermal conductivity of the polymer, remains molten during the injection molding cycle. This design eliminates the need for removing and/or recycling the runner. The problem with this design is that when the injection molding machine is down for any extended period of time the runner solidifies and has to be physically removed before beginning the next molding cycle. As molders have become more comfortable with hot runner technology, insulated runners are rapidly becoming obsolete and not many injection molds are built today utilizing this technology.

The externally heated hot-runner system also maintains the plastic in a fluid state while the mold is running with the pressure at each gate approximately the same. Maintaining a uniform temperature in the sprue bar and the hot-runner manifold is very critical to process and product consistency. Start-up procedures must be carefully followed according to the mold makers specifications to prevent damage and material leakage in the manifold.