Antistatic Agent: Additive used to help eliminate or lessen static electricity from the surface of the plastic part.

Cavity: The space inside a injection mold into which material is injected.

Clamping Plate: A plate fitted to a plastic mold and used to fasten the mold to a platen.

Co-injection Molding: A special multilateral injection process in which a mold cavity is first partially filled with one plastic and then a second shot is injected to encapsulate the first shot. 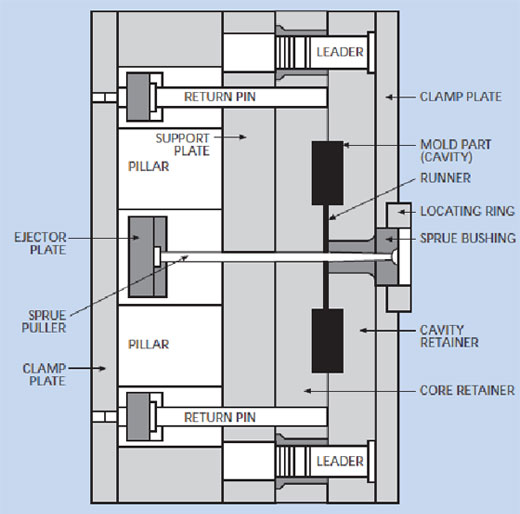 Cooling Channel: Channels located within the body of a injection mold through which a cooling medium is circulated to control the mold surface temperature.

Cycle: The complete sequence of operations in a process to complete one set of moldings. The cycle is taken at a point in the operation and ends when this point is again reached.

Daylight Opening: The maximum distance between the stationary and moving platens of the clamp unit in the fully open position.

Direct Gate: The sprue that feeds directly into the injection mold cavity.

Draft: The degree of taper of a mold-cavity sidewall or the angle of clearance designed to facilitate removal of parts from a plastic injection mold.

Ejector Pins: Pins that are pushed into a mold cavity from the rear as the mold opens to force the finished part out of the mold. Knockout pins is another glossary.

Ejector Return Pins: Projections that push the ejector assembly back as the injection mold closes. Surface pins and return pins are other glossary of terms.

Family Mold: A multi-cavity mold where each of the cavity forms one of the component parts of an assembled finished part.

Fan Gate: A gate used to help reduce stress concentrations in the gate area by spreading the opening over a wider area. Less warping of parts can usually be expected by the use of this type of gate.

Flash: Extra plastic attached to a molding usually along the mold parting line.

Flow Line: Marks visible on the finished items that indicate the direction of the flow of the melt into the plastic injection mold.

Flow Marks: Wavy surface appearances on a molded part caused by improper flow of the melt into the injection mold.

Gate: an orifice through which the melt enters the mold cavity.

Hot-runner Mold: A mold in which the runners are insulated from the chilled cavities and are kept hot. Hot-runner molds make parts that have no scrap.

Injection Pressure: The pressure on the face of the injection screw or ram when injecting material into the mold.

Jetting: A turbulent flow in the melt caused by an undersized gate or where a thin section rapidly becomes thicker.

Jig: A tool for holding parts of an assembly during the manufacturing process.

Knockout Pins: A rod or device for knocking a finished part out of a plastic mold.

Mold-temperature-control Unit: Auxiliary equipment used to control mold temperature. Some units can both heat and cool the injection mold. Another glossary termed chillers, only cool the mold.

Moving Platen: The platen of an injection molding machine that is moved by a hydraulic ram or mechanical toggle.

Multi-cavity Mold: An injection mold having two or more impressions for forming finished items in one machine cycle.

Nozzle: The hollow-cored, metal nose screwed into the injection end of a plasticator. The nozzle matches the depression in the mold. This nozzle allows transfer of the melt from the plasticator to the runner system and cavities.

Packing: The filling of the mold cavity or cavities as full as possible without causing undue stress on the injection molds or causing flash to appear on the finished parts.

Parting Line: On a finished part, this line shows where the two mold halves met when they were closed.

Pinpoint Gate: A restricted gate of 0.030 in or less in diameter, this gate is common on hot-runner molds.

Retainer Plate: The plate o which demountable pieces, such as mold cavities, ejector pins, guide pins and bushings are mounted during injection molding.

Runner: The channel that connects the sprue with the gate for transferring the melt to the cavities.

Short Shot: Failure to completely fill the plastic injection mold or cavities of the mold.

Shot Capacity: Generally based on polystyrene, this is the maximum weight of plastic that can be displaced or injected by a single injection stroke. Generally expressed as ounces of polystyrene.

Shrinkage: The dimensional differences between a molded part and the actual mold dimensions.

Side Bars: Loose pieces used to carry one or more molding pins and operated from outside the plastic mold.

Side-draw Pins: Projections used to core a hole in a direction other than the line of closing of a mold and which must be withdrawn before the part is ejected from the injection mold.

Single-cavity Mold: A mold having only one cavity and producing only one fiinished part per cycle.

Sink Mark: A shallow depression or dimple on the surface of a finished part created by shrinkage or low fill of the cavity.

Sprue Bushing: A hardened-steel insert in the injection mold that accepts the plasticator nozzle and provides an opening for transferring the melt.

Sprue Gate: A passageway through which melt flows from the nozzle to the mold cavity.

Sprue Lock: The portion of resin retained in the cold-slug well by an undercut. This lock is used to pull the sprue out of the bushing as the mold opens. The sprue lock itself is pushed out of the plastic injection mold by an ejector pin.

Sprue: The feed opening provided in injection molding between the nozzle and cavity or runner system.

Stack Molds: Two or more molds of a similar type that are positioned one behind the other to allow for additional parts to be manufactured during a cycle.

Stripper Plate: A plate that strips a molded piece from core pins or force plugs. The stripper plate is set into operation by the opening of the plastic injection mold.

Tab Gate: A small removable tab about the same thickness as the molded item, but usually perpendicular to the part for easy removal.

Undercut: A protuberance or indentation that impedes withdrawal from a two-piece rigid mold.

Valve Gating: A type of gate where a pin is held in the gate or channel by spring tension. As the injection stroke moves forward, this gate compresses the plastic in the runner. When this pressure build-up is sufficient to overcome the spring tension, the pin is then pushed back (pulled) and the fast decompression of the melt fills the cavity at extremely high speed.

Vent: A shallow channel or opening cut in the cavity to allow air or gases to escape as the melt fills the cavity.

Warpage: This term means dimensional distortion in a molded object.

Weld Line: Marks visible on a finished part made by the meeting of two melt-flow fronts during injection molding.

Injection Molding Clamp PressureTwo types of injection-compression used for thin walled high aspect ratio parts. The first uses a moving side core or se... Mold StandardsA book of “Mold Standards” is a detailed description of what is required to match the mold with the molding ... Injection Mould CoolingInjection Mould Cooling serves to dissipate the heat of the molding quickly and uniformly, fast cooling is necessary to ... Injection mold parting surfaceWhat is the injection mold parting surface? Generally, injection mold has two major components: the movable halve and th... Clear Plastic MoldingClear plastic injection molding parts usually made in PC, POM, PMMC, AS, PET, these clear plastic kits used widely in di... Electric vs. Hydraulic injection molding machineYou can get a larger shot size out of a hydraulic injection molding machine. There are times when you are pushing the in...